In pursuit of enlightenment

9:29am I’m going to attempt to go early vote in a few minutes. I went over and tended the two Tibetan spaniels then came home and fed Bitzi and took her out for a long walk. I haven’t eaten since before 6pm last night and that meal was a chicken breast and broccoli. I’m fasting until noon. Well I am having some black coffee.
It’s chilly, damp and rainy today. Good Halloween weather.
Since the painting is done Mike has his office set up in the spare bedroom which was just painted the prettiest shade of pale yellow. He doesn’t like it as well in there and says it’s not as sound proof as the back office. I put most of my stuff back in the office but did manage to thin out some more stuff. It’s hard to part with all my band teacher stuff and instruments I’ve acquired over the years. I’ve gotten rid of a lot but I still have two good student clarinets and a flute that need to go to some deserving soul. Anyway I told Mike to move his set up back in the real office if he wants. I don’t use it that much anyway but he needs a quiet office most days. 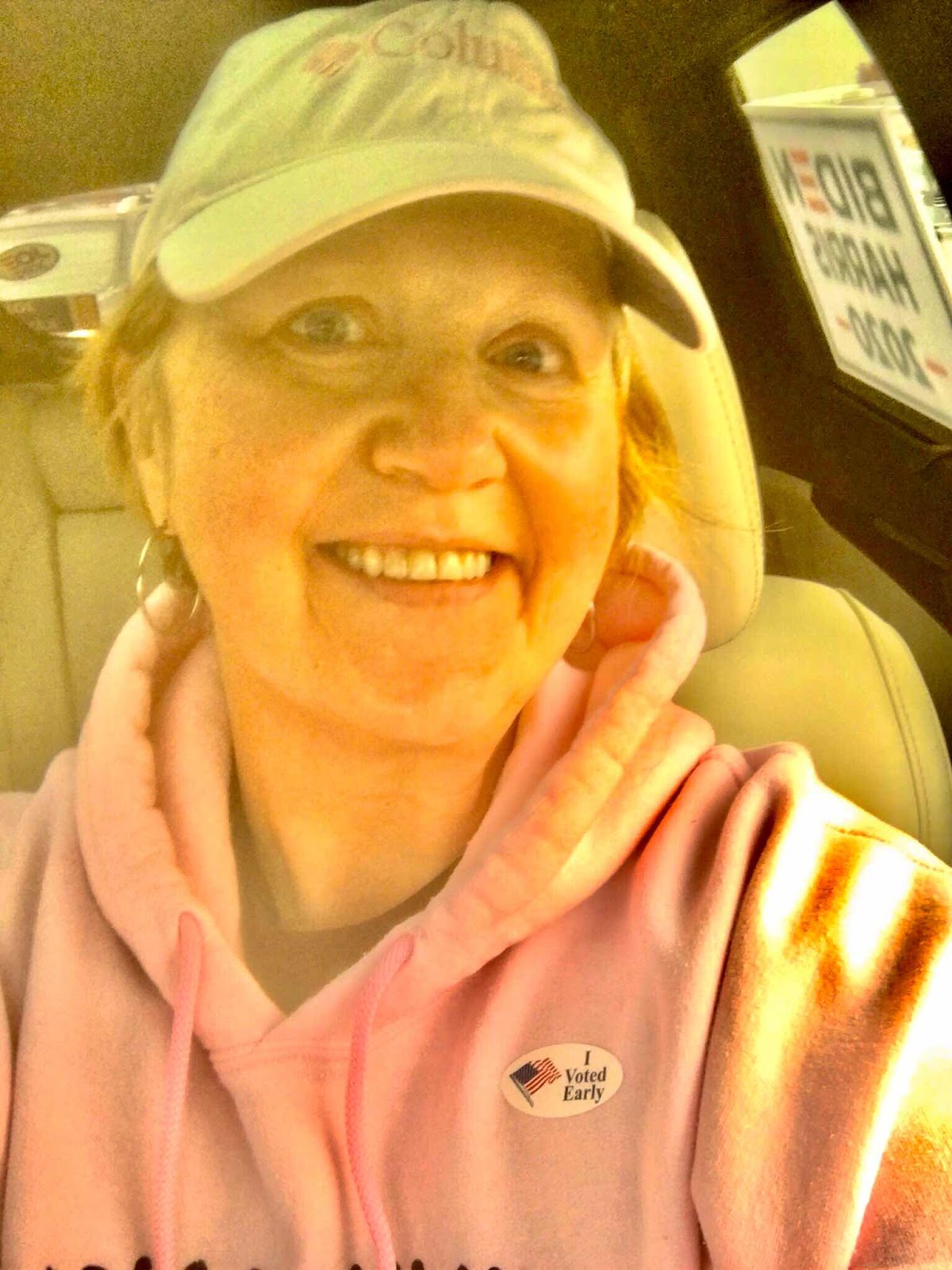 I voted at a mobile unit in the parking lot of the Huntley Jewel grocery store. There was no line or wait! I’ve been hearing of people waiting in long lines to vote.Sweet!
I’m going to go organize my crap in the back office. I just kind of dumped the stuff back in there when the painting was done. It’s kind of a mess. I got my plant situation fixed in our bedroom. I have a lot of potted plants that live outside in the summer. In the fall I bring them inside and put them by the windows in our bedroom. I had a bunch of small folding tables in there holding the plants. I moved all the folding tables out and put my glass shelf unit and an antique table by the windows and put the plants on them. It looks a lot neater. Space is everything in this small house!
I’m trying to be more patient and understanding of others. I am trying to always deal with others with kindness and respect. This is a very harsh, divided country right now. I remind myself that people often have some underlying problem I don’t know about that can make them come off as f-ing assholes. I often don’t know what their story is. I remind myself to have patience, kindness, forgiveness and love in my heart. That’s what I would like others to show me. Life is an echo. Whatever energy you put out will come back to you in some way. I hope that one day I can reach enlightenment (or sumthin’ close to it.)
I just got Mike to take a break from work and run over and vote. It was quick and he didn’t have to wait and got back to work.
2:05 I just finished organizing my stuff in the back office and told Mike he can move his set up from the guest bedroom back in there if he wants. The back office is more private and quiet for his Zoom meetings and conference calls. It looks much neater and brighter with fresh paint and a bunch of stuff gone!
*********************************
8:27pm
Watching the presidential debate🙄. Ugh
SO now we are NOT taking Mike's mom to Wisconsin. Too much risk with the virus surging. Thank God.  He sat next to me a few minutes ago and talked her out of it on the phone. I'm so relieved. I was dreading it. I'm going over to her house tomorrow to put drops in her dogs ears.
at October 22, 2020 No comments: