10:20 am. It’s Friday but no days seem like the day they are anymore. It’s weird but I’ve heard other people say that too. Things are different now. I went for a nice bike ride a while ago and went across the way to Wildflower Lake and rode through the parking lot. I’m not sure if bikes are allowed on the path that goes around the lake, I know golf carts and walkers are allowed. I then rode up past the main Prairieview Lodge and then back home. It was a long way for me just starting to ride a bike again. My bike doesn’t have any gears to shift to make the few small inclines easier.  After I got home I cooled off a bit and then took Bitzi for a walk up to the top of the hill at the park across the street. I’m still sweating but it’s a cool slow sweat now.  I hate when I have the big sweat going and my face sweats. I hate that!  It’s really thick and muggy out there lately. When we moved Mike gave his nice 10-speed bike to his son Casey. I wish he still had it so he could ride with me. Of course he’d be going a lot faster than me with the two very different bikes. Maybe he can borrow the bike back from Casey and if he likes riding can buy a new one.
Right now I’m waiting for a guy from TRS to call me back. I’ve received my last school pay check and now I want to know when my pension stuff kicks in. I’ve called TRS several times in the last few weeks and gotten random rude hags who tried to rush me and cut me off and we condescending. I don’t know whether they have a shitty work condition or what but I’ve gotten some real bitches lately. I just want a few important questions answered by somebody who in polite and knows what the hell they’re talking about. I don’t think that’s too much to ask, is it? 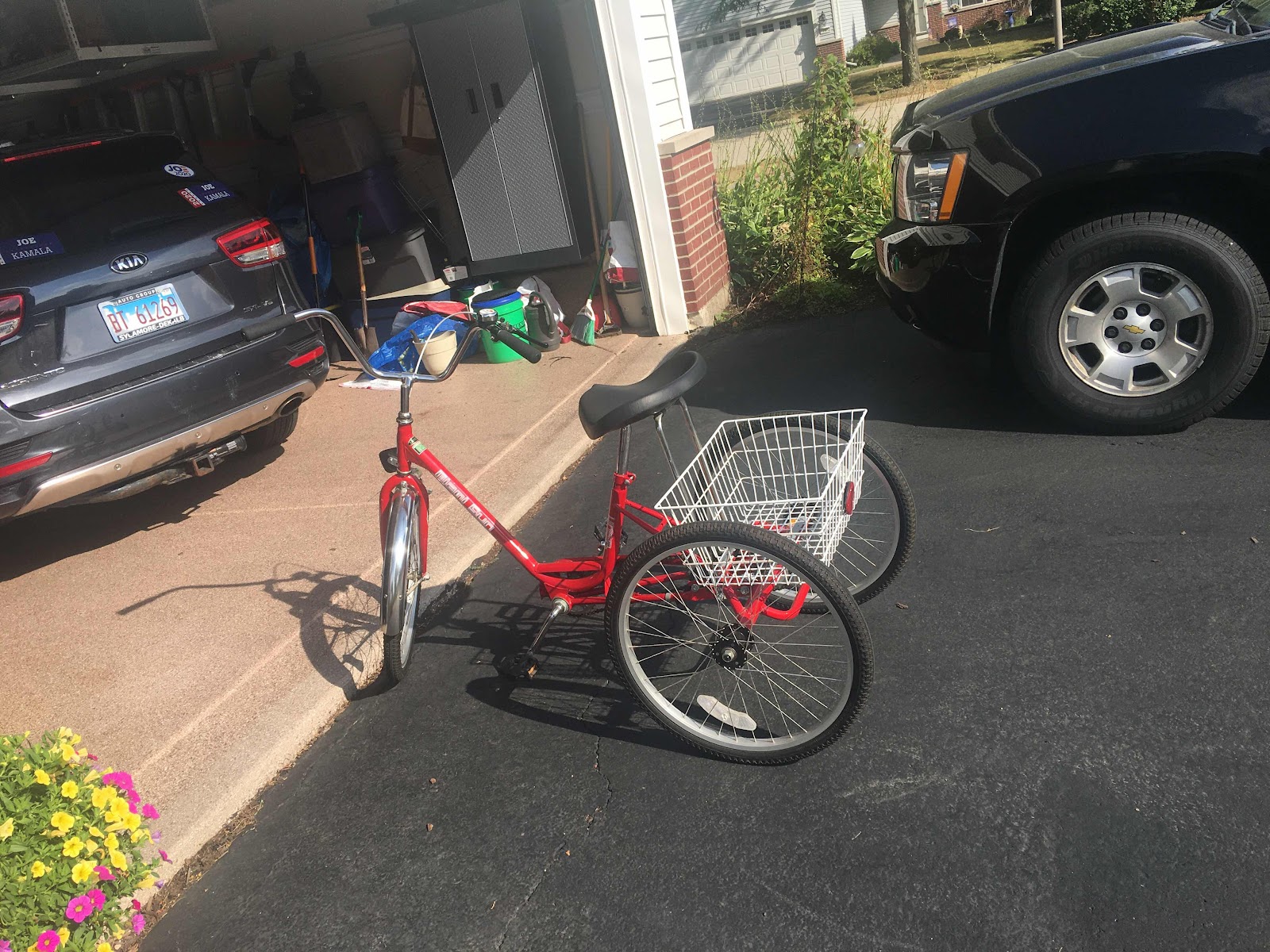 Mike has always wanted to handle the money and pay the bills. That has been fine for him to do that. Of course for almost 20 years I had $600 a month taken out of my paycheck and put in my own private account. I just needed to do that after what I’d been through in my first marriage. About a year ago I finally started having my full check amount deposited into our joint checking account. That was a HUGE deal to me......so the other day Mike got a call from the Nicor gas company saying we hadn’t paid out bill in 18 months and they were shutting our gas service off on August 31. We ALWAYS pay out bills in advance ALWAYS so that seemed completely ridiculous. Still, I couldn’t recall seeing that bill come in the mail. I guess I figured he was paying it online. He looked through all our records, bank statements, credit card statements and found nothing. After  about 9 calls with Nicor we finally found that when we moved and called them to change the address they had written down the wrong address and had been sending the bill somewhere else for 18 months since we moved. But Mike, who pays the bills, never realized we weren’t getting the Nicor bill and we weren’t paying it. So there was a late penalty tacked on but he argued with them and got them to take it off plus a reduction for the mistake. So we just paid $700+ for 18 months of unpaid gas bills...........crazy shit........
It looks sunny outside now. It was overcast to the west and thunderstorms are predicted for late afternoon and evening. I may go to the outdoor pool later if the weather holds out. I really like my water exercise. I’ve been feeling a little drain-y in my sinuses the last couple days and wheezing a bit. Last night I was coughing a bunch at bedtime so I took a Benadryl but I woke up twice coughing with the drainage. I sleep on a wedge pillow for that draining problem but last night it wasn’t helping much. I’m sure it’s the pollen in the air-probably ragweed. I get this every year about this time. I don’t test as allergic to anything but I sure am sensitive at certain times of the year.
So we’re going to the resort in Lake Geneva Monday through Thursday next week. Annette, Mike’s mom, has offered to take care of Bitzi. I think it will be good for her , considering she just had to put down her own little dog last week. I’m sure she and Bitzi will have fun, plus it will save us some money. Mike gives Annette money all the time anyway. He paid her vet bill last week to have her dog put to sleep, a memory paw print plaque and her ashes in a urn........We spent almost a thousand dollars on his nephews wedding with the shower and wedding gift. Seems extravagant to me. My family are so much simpler folks. Oh well......and now Mike is freaking out to me to find out when my pension money will start......I know it will get here. He just frantically ordered me this morning to call and find out exact facts. Whatever.......
I finished the last episode of my rewatching of Hulu’s The Handmaid’s Tale last night. June IS Badass. I love rewatching old favorite movies and series. I’ve rewatched the Sopranos and VEEP and Deadwood many, many times.
Next week on Saturday I’m going to my daughter Sarah’s in Lewistown and watching the boys. whe I go home I’ll stop in Peoria and see my sister Vicki. I may just come back home on Sunday or stay a day or two depending on how it goes. I should go see my other kids, other sister and some friends too while I’m down there.
- August 28, 2020 No comments: